The best wee act of hegemony in the world 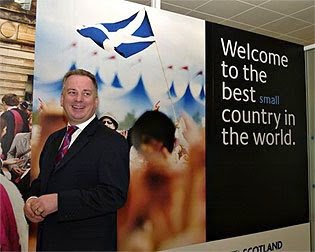 Because we didn't challenge the truth of the slogan; we didn't notice that it needed to be challenged. So the idea - the meme - the hegemonic masterstroke that McConnell set out to achieve has been achieved. We have cast our national debate in terms of being a small nation. If you went out in any street in Scotland and asked ten passers by whether Scotland was a big country, a middle sized country, or a small country, all ten would agree, Scotland is 'wee'.

We like the notion. It's romantic, the small band against the world. Our national myth - our stories of Wallace and Bruce are cast as the brave few against the might of a much more powerful hostile world. And so we let it pass unchallenged, and thus give an unnecessary gift to the unionists. Like James the Fourth at Flodden Field, we march down off the strong hill to face our opponents on their territory.

The unionists, of course, are all too happy to present Scotland as a wee nation. Awfy cute, of course; Awfy couthie. But ower wee to stand on its own two feet in the world. Needing the generously offered protection - oh, and 'subsidy' - of our larger, stronger, more viable neighbour.

So what's the truth of it?

Scotland has a population of 5.1 million people.

So those 110 countries that are smaller than Scotland, are they all 'too wee' to be viable? Iceland (population 312,851), is that big enough to defend its cod stocks against the combined might of Britain and Spain? Errr... yes, actually. Malta (population 407,000) and Luxembourg (467,000), are they big enough to be full members of the European Union, with seats on the Council of Ministers? Errr... yes, they are, actually.

Looking at the European Union as a whole, Finland, as I said earlier, is just one place up the table from Scotland. Below us are Ireland, Lithuania, Latvia, Slovenia, Estonia and Cyprus, not to mention Malta and Luxembourg. Are all these ower wee to govern themselves? Ower wee to be full members of the European Union? They do not seem to think so. And among our other European neighbours outside the union (and in no hurry to join it) are Iceland (see above), Norway (4,727,777) and Switzerland (slightly bigger than us at 7,508,700). Are they 'ower wee' to stand alone in the world? They, clearly, don't think so.

Indeed, if you look at those three European nations outside the EU, each plays a very significant role in the world. Iceland provided the neutral venue for the USA and the Soviet Union to meet and negotiate the end of the cold war. Norway has made significant and very positive interventions in the Middle East. Switzerland hosts the Red Cross and many United Nations agencies. They can do these things precisely because they're not great powers and don't pretend to be great powers; and thus can be trusted to be honest brokers.

So let's squash this 'small nation' nonsense. Scotland is not 'wee', no matter how couthie and romantic that may feel. Mid table respectability - or mediocrity - is our position, at least on size. We're exactly average. 'The least self-confident medium sized country in the world' may sound a lot less romantic than 'the best wee country', but that's what we are. Medium sized, with well above average resources, well above average potential, well above average wealth. And we lack the courage to take our independence, because we allow other people to characterise us as 'wee'.