A Romanian friend, living and working in London, asked me today, 'is the Scottish Parliament going to veto ‪Brexit‬?' This post is my answer.

The problem with this legal theory is that because the United Kingdom doesn't have a written constitution, there's nothing to stop the Westminster Parliament overturning the Scotland Act. There's just an agreement that they won't.

If the Scottish Parliament did veto Brexit, the Westminster Parliament would then probably repeal the Scotland Act. At which point we're really in uncharted territory.

So Scotland could now just make a Unilateral Declaration of Independence, and if Westminster tried to repeal the Scotland Act I think we probably would. But that, too, would be a really messy situation. It could get as bad as civil war.

I think the threat to veto Brexit is a hardball negotiating tactic. It really depends on whether the Westminster parliament wants Brexit or not. The SNP government in Scotland does not intend to allow Scotland to be taken out of the EU and is prepared to play hardball.

There are three possibilities:

1: Westminster could agree to support Scottish independence if we don't veto Brexit; Scotland becomes independent and stays in the EU, while the rest of the UK leaves (and maybe Northern Ireland rejoins Ireland, but that's another potentially bloody mess). This is a good outcome for Scotland and for the pro-Brexit faction in England, but as I say could get REALLY nasty in Ireland.

2: Westminster actually doesn't want Brexit and will use the excuse 'Oh, we couldn't start Article 50 because the nasty Scots wouldn't let us' (I actually think this is quite likely because there isn't a majority for Brexit at Westminster either). Scotland doesn't become independent and the whole of the UK remains in the EU. That sounds like the best outcome but it probably isn't because it would lead to violent anti-Scottish feeling in parts of England, and I fear that would get very nasty.

3. Westminster seeks to repeal the power of the Scottish Parliament to veto #Brexit, and Scotland declares independence. Again, there's a serious risk of trouble in Northern Ireland and I think there would probably be a lot of anti-Scottish rioting and violence in places in England. As I said before I think there could even be civil war.

If there were a big majority for Brexit in England the sensible thing all round would be a friendly separation, England and Wales leave the EU and gradually diminish into a bankrupt and irrelevant basket case of a country, while Scotland remains in an EU which will probably not have a very bright future itself (because as well as destabilising Britain, Brexit has destabilised Europe).

Even that isn't a great situation, because the rest of the EU is going to be utterly and rightly pissed off with the UK for creating this mess. But it might mean the UK would, for the time being, stay together and stay in the EU.
Simon Brooke at 16:55 No comments:
Share

And so we begin again

The last - very negative - referendum is over, and it ended in the triumph of Hate over Fear. It was a referendum fought between neoliberals and xenophobes, a contest which pitted blatant racism against doomsaying. A campaign - on both sides - of the most extreme dishonesty and bad faith we have seen in my lifetime.

But from its ashes arises a new referendum.

Let's make this one positive. Let's make it about welcoming, about looking outwards to the world and talking about how Scotland can contribute to making it a better place.

Let's say something positive.
Simon Brooke at 22:34 No comments:
Share

On a Difference of Opinion 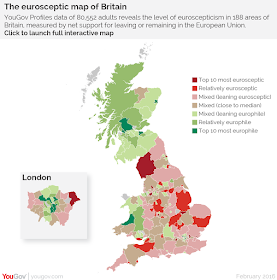 One of the things the Better Together campaign tried to convince us of during the independence referendum campaign was that there was no significant political difference between Scotland and the rest of the UK in general, and England in particular. That always struck me as a tendentious proposition, but it's only in the last couple of weeks that I've run the numbers and discovered quite how false it was.

YouGov's startling remain/leave map is one of the pieces of information which started me investigating; the other was the claim by a Twitter user (I've forgotten whom) that Scotland wasn't really any more left wing than England.

Now, of course, what counts as 'left wing' depends on your standpoint; the particular Twitter user with whom I discussed this believed that Labour were left wing, and that the SNP were not. The Political Compass disagrees on both points, and I'd tend to trust the Political Compass as a fairly neutral observer on this. In any case, the question is not whether one party is or is not 'left wing' in an absolute sense, but whether one position is more (or less) left wing than another.

We're not. We started from different places and have evolved in different ways under different influences. So let's put this 'all one nation really' nonsense to bed once and for all.